From Merovingians and Habsburgs over Dukes to national forest 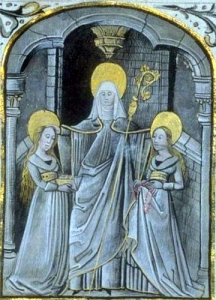 At the beginning of our era (Mesolithic) the Hallerbos was still part of the vast carboniferous forest, that slowly started to fragment, starting around the time of the Romans and from which originate smaller forests, one of which was the ‘Zoniënwoud’. For many centuries, the Hallerbos and the ‘Zoniënwoud’ formed a common Eastern border.

The earliest source mentioning the Hallerbos dates from 686 when Saint Waltrudis bequeaths this forest domain to the Abbey of St. Waltrudis in ‘Bergen’. Just before 1200, this abbey was transformed into the noble chapter of Saint Waltrudis. Since the chapter of ‘Bergen’ was not able to manage this remote forest, the Hallerbos is put under the tutelage and the protection of the Lords of Brussels in 1229 by an agreement. In 1239 this agreement between the chapter, the count of Hainaut and the Castellan of Brussels is renewed. It is agreed that these three parties each get equal rights in the Hallerbos. As a result, the three parties each receive a third, of both revenue and fines that are levied there. The castellan of Brussels and his son renounce their share in the same year for the benefit of the count of Hainaut. From then on 1/3 goes to the chapter, 2/3 goes to the count of Hainaut and this remains unchanged until 1831. Later on, the Dukes of Burgundy and still later the Habsburgs get their share in this forest domain by inheritance.

After a period of joint management, problems arise between the two owners, respectively the Chapter and the Dukes of Arenberg. They decide to solve the problem of joint ownership. In 1779, 24 boundary stones are erected marking the borders between the two parts of the wood, bearing the chiseled inscriptions SW (St. Waltrudis) and AR (Arenberg). Most of those posts can still be seen today.

The total area of the Hallerbos had already shrunk to 531 acres, or about 660 ha at the time of the division. Large parts of the forest had been converted to agricultural land. 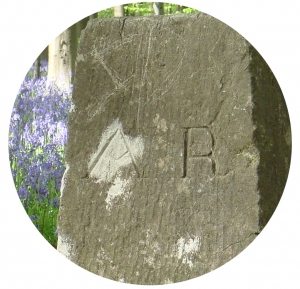 The connection with the ‘Zoniënwoud’, through the ‘Zevenbronnen’ area, along the east border of the forest, over about 1.5 km in length, is clearly visible on the map of the Ferraris from the same period (1777). At the beginning of the 19th century, however, that common border is lost due to further deforestation and forest fragmentation.

In the aftermath of the French Revolution (1789) and after the invasion of the French troops in 1794, all church property is confiscated in the region. In 1797, the Chapter is dissolved and their third share of Hallerbos became State owned by the French Republic. The domination by France ends in 1815 as a result of the defeat of Napoleon at the battle of Waterloo. The Hallerbos then became State owned by the Netherlands. In 1822 (under the reign of King William I) jurisdiction over the Hallerbos, as part of the ‘Zoniënwoud’, ceded to the Dutch society ‘Algemene Nederlandse Maatschappij ter begunstiging van de Volksvlijt’ (Society favouring the people’s industry) (later to become Société Générale). The management by this Société Générale lasts until 1831, when it is decided to split the Hallerbos in 20 parts and to sell them to individuals. At that time the Arenbergs succeed in buying all 20 parts at once. So they become the owners of the remaining third of Hallerbos, and as a consequence the whole Hallerbos is in their possession.

Being the owners of other large forests such as the ‘Heverleebos’ (forest in Heverlee) and in ‘Meerdaalwoud’ (forest in Meerdael), the Dukes introduce a sound forest management, which is entrusted to the ‘Regie’ (government) of Arenberg. Just as in the middle ages, the Hallerbos is managed as a timber forest, in which the ‘Regie’ strongly boosts the stock of old trees. That stock, also called ‘high forest’, is composed of a substantial percentage of beech, a highly prized tree species, as well as home-grown oak and Red oak. The coppice layer consists mainly of Sweet chestnut and Robinia. 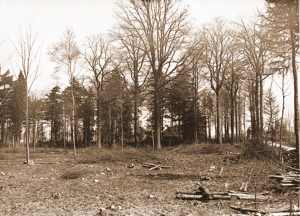 During the 1914-1918 World War, the Germans fell all the big trees, leaving the Hallerbos virtually ruined.

After World War I, all the possessions of the Arenberg family are confiscated by the Belgian Government as a warranty for German reparations. In 1929 the Hallerbos (now 569 acres) finally becomes property of the Belgian State as war compensation.

From 1930 to 1950 the Hallerbos is completely reforested, apart from some existing young forest resources. This explains the young aspect of the forest.

The expropriations for the construction of the motorway Brussels-Paris in 1968 reduce the area of the forest again by 25 ha.

As a result of the federalisation of Belgium in 1983, forest management is divided between the Flemish region: 511 ha (territory Halle) and the Walloon region: 48 ha (territory Wauthier-Braine). The forest is enlarged in 1998 by the purchase of 3 ha of farmland by the Flemish Government. This area is planted with trees in cooperation with the city of Halle in the context of the second millennium. The forest grows again in 2005, when nearly 11 ha is added through the purchase of more agricultural land. In 2007, 5 more ha is planted with trees in the context of the charity ‘Kom op tegen Kanker’ (Take a stand against cancer). In 2008 and 2010 another hectare is forested along the Chapter. In 2009, 1.6 ha is forested at the ‘Hogebermweg’. The total area of the forest now amounts to 542 ha.